Click here to register now for our 2020 Team Tryouts!

We are excited to announce our tryout dates for the 2020 season. 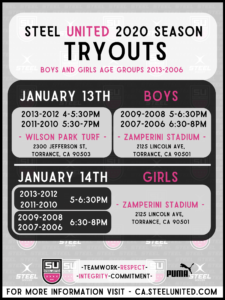 Steel United is a non-profit soccer club committed to maximizing each player’s potential on and off the field. We produce highly skilled players who are dynamic and competent both physically and mentally. When players leave the pitch, our job isn’t done. Education, life skills and personal development of every young athlete is at the heart of everything we do.

We offer the following programs for players that are a part of the club.

Click here to register now for our 2020 Team Tryouts!