Steel United welcomes “Big” Joe Velazco to our Goal Keeping Core.  Joe will join Clark Lydon and the two will share the role of developing the Steel United Goal Keepers. 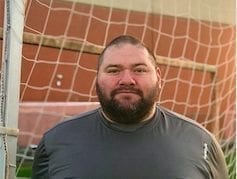 Joe’s goal keeper sessions will take place on Monday’s at Torrance Adult School, Clark Lydon will work with the goal keepers on Friday’s at Zamperini Field in Torrance CA.

Our goal keepers at Steel will now have the best of both worlds with adding Joe Velazco back to the coaching ranks.  Coach Joe and coach Clark Lydon will coach the goal keepers.

Clark Lydon says  “I am extremely excited on this new venture.  I am looking forward to working with Joe Velazco and growing our clubs goalkeeper program”

Club Director of Coaching Michael Quigley says “We are excited to see how Joe and Clark will work together to provide our goal keepers an advantage that many clubs do not have.  Two top goal keeper coaches with a vast skill set, and experience at the highest levels.”

Big Joe says  “It will be a great opportunity to work and build this new club Steel United, especially developing the goalkeeper program in collaboration with Clark Lydon”

Joe Velasco has also guided many goalkeepers to Men’s & Women’s NCAA college soccer programs.  For the past 2 seasons Joe has worked with the Goal Keepers at Nationally Ranked Marymount University.

Clark Lydon also has an impressive resume, Clark made his Conference debut at 16 and made first team appearances for multiple semi professional sides in the North of England, including; Guiseley FC, Bradford Park Avenue, and Brighouse town.  He committed to a scholarship in America at 19 to Tennessee Wesleyan College, then transferred to Marymount California University.

At Marymount California University he compiled multiple awards at the NAiA level including Cal Pac Defensive awards, All Conference team selection, and a trip to NAIA National Final Four in 2014.

Clark is currently on the coaching staff of Santa Monica City College, and guides the goal keepers there.